I’ve been watching a lot of online TV these days. I got rid of my cable a couple months back and have been struggling to find decent content to watch on my 32″ LCD TV. Cable or Satellite will most likely be turned back on but I’m very intrigued by the online TV concept. Just go over to Joost.com to understand just how much potential this new P2P service has when it comes to television. More to come on Joost in a later post. I just got my invitation to be a beta tester last week. If you’re looking for an invite, I don’t have any right now. They only give you invites after being a beta tester for at least a couple weeks. Most of my invites are already spoken for anyway. Maybe I’ll do some sort of contest if I have any left over.

Before a service like Joost can really take off and be widespread, I’ve been watching online TV from various websites. One in particular is the Vice Records channel, VBS.tv.

To introduce you to VBS.tv, I’ve picked one of my favorite clips from their “Bangs” series. Lance Bangs is a filmmaker that is well known for his work with Jackass and music video’s with Belle & Sebastian and Arcade Fire. 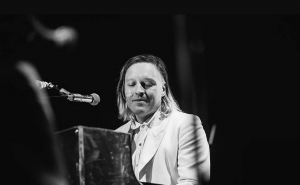 The clip below is Arcade Fire playing “Wake Up” at Judson Memorial Church in NYC this past February. It looks like the encore and they’ve decided to finish up the show by playing their instruments in the middle of the crowd. Looks pretty intense and makes you feel really pissed about missing out on the tickets for your local show. Sorry, but I just had to rant because I failed to pick one up. And what are they going for now on the black market? Any way, that’s just a quick cry for help to any Bostonian’s with an extra.