That means it’s The National showcase day on the square.

They play tonight and tomorrow at The Middle East Downstairs. Both shows are sold out.

Download: “Fake Empire” – From their recent release, The Boxer

I was introduced to The National like a lot of music fans two years ago when their album, Alligator, came out of the wood work and squeezed passed the critically acclaimed and highly publicized Sufjan Stevens album, Illinoise, and made it to the top of many ‘Best of’ lists. 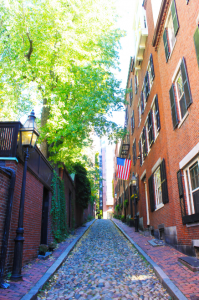 There is an immediate appeal to The National I think for almost everyone I know. There is something about the simple melodies but complex persona that intrigues most fans of music. They seem to wrap up a lot of sound in to a tight package. They’re never really too risky or experimental. Some may even argue that their most recent album, The Boxer, isn’t risky enough.

But maybe not being risky is risky. There are many bands, and I mean many, that I think try too hard to be different or unique. It’s probably due to an overbearing front runner who feels his artistic ability is above and beyond the norm. And his bandmates are like sheep and go along because, hey, “we’re in a rock band man and all we care about is drugs, sex, and rock and roll”.

The National come from a different breed then most young indie rockers. They’re all in their 30’s. They all held or rather still hold regular day jobs and don’t seem to prescribe to the whole rock ethic. Things maybe changing for some of the members as they slowly but surely make their way out of the day job and in to the spotlight but in the end, their music has stayed consistent.

In their earlier work (self-titled album The National and Sad Songs for Dirty Lovers), the vocals have a bit more snap to them. The pop anthems are worn a bit more on their sleeve versus the actual fabric. The songs themselves have all seemed to skate along the same line. Matt Berninger writes from an outsiders point of view and mixes the every day man’s life with the surreal life. This combined with their remarkable ability to write catchy pop anthems is what makes everyone I know say, “Hey, these guys are really good”.

We all seem to relate to this group. Whether you’re reaching the parenthood years or fresh out of college, The National has a song for you.

The Boxer has been resonating with me for the past two weeks. While their music has stayed consistent over the years, The Boxer has taken a bit of a step forward even though it may seem as if they are taking a step backwards by toning down the volume. It’s the subtle nuances of each track that make this album special.

Having the show at The Middle East is just about as perfect as it gets.  The National are an intimate band and the fact that my apartment is literally around the corner and the Middle East itself is a tight little venue with low ceilings, tonights show has intimacy written all over it.