This just in, great line up coming together in August to tour most of the northeast, down to North Carolina and then over to Tennessee. Â The line up includes Old Crow Medicine Show, Dave Rawlings Machine (Featuring Gilian Welch), The Felice Brothers and Justin Townes Earle. 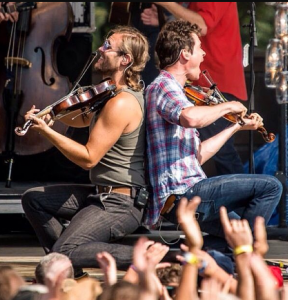 The tour starts in New Hampshire at the Hampton Beach Casino on August 4th and the following night they hit up the House of Blues here in Boston. Â I’ve been meaning to get over to the newly built House of Blues, which took place of Avalon and Axis on Lansdowne Street behind the Green Monster. Â However, I think I may have preferred this show to be at the BoA Pavillion down in the harbor. Â One of the better outside venues around and nothing says summer then a big old ho-down like this one.

If you’re not sure about these artists on paper, just give then a chance in the flesh and I promise you won’t regret the decision.

Listen to a preview of what you’ll hear by streaming “Run Chicken Run” off of The Felice Brothers latest album, Yonder is the Clock.