My first experience with Yonder Mountain String Band was back in college at the Higher Ground, a small venue just outside of Burlington, that has (or rather had as it since moved to a new location) an intimate vibe.Â Intimate and bluegrass often go hand in hand.

Fast forward eight years and now I’m seeing them at the House of Blues in downtown Boston.Â A venue that can hardly be described as intimate.Â If you’re a hardcore Bluegrass fan, you probably already know, but Yonder is not your typical bluegrass experience.Â And in fact, if you’re someone who is just getting into the genre, this show may not be up your alley.

Yonder is strictly for those who are either a fan or were a fan of the jam band scene.Â They take what is typically viewed as a structured genre – songs with clear beginnings and endings – and turn it into aÂ state of it’s own that usually has no boundaries.Â For those seeking the unknown with their music this is exactly what you want out of a band.Â Personally, there is always this curiosity that draws me to the jam band philosophy.Â However, if I were given a choice between a traditional bluegrass show (i.e. Sam Bush, Del McCoury or Tony Rice) and a jam band bluegrass show, I’d go with the traditional.

If you were to take the instruments away from each band member your first impression may not be one of bluegrass.Â The bass player himself looks like he could be coined the bluegrass version of Kid Rock with his long “counter culture” like hair dangling from the full brimmed black hat.Â But as soon as they start to banter and make short, often times cheeky side jokes, you know these are bluegrass players.

The crowd was your typical jam scene with mostly college kids filling the House of Blues with your occasional Dead Head from New Hampshire making the trek down.Â Saw a couple of what looked like high schoolers who are just starting to explore the jam world.Â Per usual at these types of shows, there were two sets.Â The crowd remained well in tact for the second set which convinced me we were at a pretty good show when it comes to pretty good shows you normally get really drunk at such as this.Â There were family members of the band in the crowd as well which always ups the level of playing. 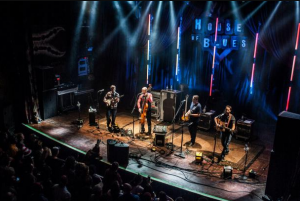 In the end our crew of about ten deep had a good time during the wacky bass duel where Ben Kaufmann (upright bass player for YMSB) and what appeared to be one of the opening band members or just a friend took turns on the upright switching hands right in the middle of their plucking.Â We enjoyed the covers of Fleetwood Mac and Talking Heads.Â We didn’t necessarily enjoy the fact that House of Blues is grossly under staffed in the bartender field and it took way too long to get that first beer.Â Thankfully, either due to the owners realizing this dilemma, or just good marketing sense, they had loose beer cans being sold by girls walking through the dancing crowd.Â One rule, however, you can only have one beer in hand at a time, which is a rule strictly enforced (wink wink).

Like many other jam bands (i.e. Phish), Yonder is not well known for great studio works.Â Their latest “The Show”, was released to a few praises from the likely of places – Relix, Rolling Stone and Billboard.Â But I don’t even think the band would argue that in order to experience their music as it’s suppose to be experienced you need to see them live – and drunk too.Â In fact, as they say in their song, when the feeling is right reach for “one more jagermeister shot”.