As I follow along this summer I’ll be posting some of my favorite moments of this tour. I am not sure if I’ll be able to attend anymore since at my age you have weddings and other family things that come up and as much as I would love to hit the road and catch all the shows, it’s just not feasible anymore. But thanks to fans like MKDEVO and his HD quality streams as well as the official live streams such as the upcoming Portsmouth shows it’s a lot easier these days to be a fan even from your own couch (couch tour as some like to call it).

But I at least have Worcester to stick into my back pocket and it’s from this opening stanza that I share my favorite gem so far. 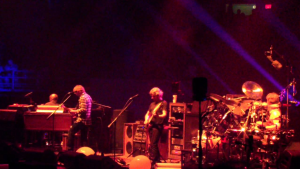 The Ghost –> Boogie on Reggae Women in the second set was a stretch of music that for me I haven’t experienced since Phish has returned to the live stage. From start to finish this stretch had a special feel to it that only comes with actually being there. But I’ll try and translate this feel through text.

From the subtle start of the Ghost, which was very uncharacteristic for this era where most Ghosts get started fast and unfortunately end fast as well, the vibe was immediately special. You could feel it in the air and it was as if they were purposefully holding back the reigns on their speed like a kid slowly taking aim with his sling shot, slowly pulling back and waiting for the perfect moment to release.

The funny thing about the jam is the release never fully came to fruition. There was a ton of interplay and some very interesting moments did take place but no peak was reached. But the Ghost jam didn’t have to hit any peaks since Boogie took care, which we’ll get to later in this post. Instead, Ghost got the groove between the band and the audience fully locked in. Many fans have been taking note of Trey’s ability to sit back in the pocket so far this summer in jams. Mike and Page are taking more apparent roles in driving the direction and this is a perfect example. Page’s clav and Gordon’s bass bombs are on full display at the beginning and then Try adds perfect coloring. I especially enjoy his diminished chord that he throws in to almost tell the boys, “hey, I like what’s going on but in order to extend lets change direction a bit”. So while he may not be the outright leader in the jam, he’s not shy to jump in with his opinion. Once this chord was hit Fishman started to pick up the pace and the Things started to pick up and the band followed right along in his footsteps.

We hit some dark territory from here on out in Ghost with Trey and Gordon really playing off of each other and going in all sorts of directions while Page tickles the organ and Fishman keeps the pace high. Gordon takes the cake when it comes to owning the rest of this jam and he makes one heck of statement around the thirteen minute mark just before Boogie when he turns on the envelope effect that is used for his bass bombs and funk openings such as Boogie and essentially turns to Trey and the band saying, “I’ve got this”.

On we go into a Stevie Wonder dance off. The energy at this point was so freaking unbelievable I get goose bumps just thinking about this particular moment. Here we are almost twenty minutes and no stoppage in site. Leading out of Boogie it continues with the Mike show but we still hadn’t hit our peak as I mentioned above with the Ghost jam and you can’t have peak without big red. So after about four minutes of just pure funk goodness, Trey throws in a serious new lick I’ve never heard him use before in a jam and the climb begins. For those who don’t like reading through all the chapters, you can skip to the twenty-one minute mark in the video below to see this climb in action. It is one of the greatest peaks I’ve heard in a long, long, long time. The energy was so hot in that room it might as well have been an outside show as the roof was completely torn from its hinges. Everyone jumping, screaming, giving each other big giant grins and collectively saying to each other, “this is why we go see Phish”.

For those haters out there who think Phish is only good when you have a head full of pot fumes and ganga gooeballs, this here married 32-year-old that drove back that night to Boston from Worcester had maybe four beers all night and had one of the best nights of live music that I’ve had in some time. It’s about the experience and the energy coming from that collective group, including the foursome on stage.

The below video is in HD quality, great sound and it’s the closest you will get to actually being there. Hook it up to your computer, turn out the lights and have a couple of beers and see what all the hypes about. Phish is ready to take on the world once again.

On a side note, the video also includes “If I Could”, which is a great song in and of itself but I only wanted to focus on the power combo of Ghost and Boogie but in no way does that diminish the importance of this songs placement at the show.