On their myspace page they describe their sound as Americana / Southern Rock / Surf. Just with that description alone I got giddy. I’ve been in a big surf / 60’s era rock mode recently. Southern rock is always at the top of my list and one of my favorite bands if not the favorite is the quintessential Americana band, Wilco.

However, Funky Nashville, a band I was introduced to by MuseBox, don’t quite live up to my expectations. They played during the SXSW MuseBox sponsored showcase, Nordic Nights, where bands from Sweden, Norway, Denmark, Finland and Iceland were giving it their all to the industry elite. 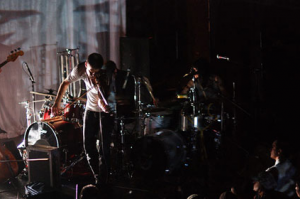 Do they achieve the sound they’re looking for, in all honesty, yes. There is the southern twang, short and quick guitar riffs remeniscent of the surf rock mantra’s. Their vocals, however, bring them down. They’re not strong and are a bit flaky. With this kind of music, the last thing I’m looking for is a Ricky Martin.

What we want is something a bit more rough around the edges, like Neil Young. But the vocal melodies bleed over in to the song and in general develop this cheese factor that can’t be ignored. So the twang in the guitar and the surf rock beats are lost in the mix and instead of feeling like a “highway groove”, as they call it, it comes out more like “backroad pop”.