I’m about a week late on this post but if there is anything that is going to get me back into posting again after this 3 week hiatus, it’s this show.

I’ve heard about the new ICA (Institute for Contemporary Art) here in Boston for some time. And we’ve been meaning to check it out but it took Critique of Pure Reason and her genius idea to bring Deerhunter to play at the Barbara Lee Theater to get us there. And I’m glad I waited.

The venue itself was enough to bring this show experience up the ladder as one of the more memorable shows in my arsenal. The room is 1/2 walls and 1/2 giant glass windows. The view is of the beautiful Boston Harbor straight ahead and to the left, the downtown Boston skyline. When the show started, there were black curtains blocking these views. I knew that we were in this room but didn’t know if the curtains would be lifted. At that point I didn’t really care, Deerhunter was about to enter the stage. 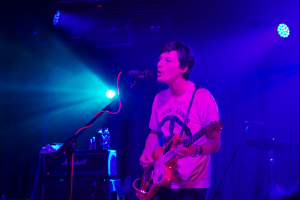 I’m fairly new to Deerhunter. In fact Cryptogram new. I have a hard time recognizing individual songs unless they are introduced. However, I can tell you this, the power of each song at their live show is overwhelmingly impressive. The force of every note from the bass amp was enough to throw me to the back of my seat but I resisted and instead sat at the edge, bobbing back and forth. While part of me felt the urge to stand up the other part of my brain said, “hold on there big guy, this band deserves our attention and there is no need to go flaring your arms about.” I listened to this voice and sat staring in awe. As they ended the first song and started on the second, the back curtains slowly opened and a wave of sheer joy swelled over the crowd as the light came crashing in.

A real human moment occurred throughout the show as members of the band kept turning towards the giant glass windows behind them to see pedestrians walking along the promenade that existed just outside the venue. Here is where the public can sit and watch the sun go down over the harbor, but on this special night, they also got a sneak peak at the genius of Deerhunter. One particular pedestrian was a young boy, probably no more then five or six years old, peering in to the window and then taking a step back to do a little jam to the beat.

For the encore, the band brought out the opening act, Keith Fullerton, who brought along his computers, where bleeps and bloops and hisses are created. They jammed out Lake Somerset off of Cryptograms and explored for roughly 12 to 15 minutes. It was during the encore that the left side curtains lifted and the crowd was introduced to the downtown skyline. So here we are, Deer hunter blaring away their noise rock in front of us and a perfect purple dusk sky hovering over the harbor and skyline, it was one heck of a serene moment.

And unfortunately this moron left his camera at home and the serene moments were left as a memory.