No, my Spanish is actually not that great. But I did my best. I may have told a few people that they smell like cheese by accident when looking for the Plaza Meyor but in the end, everyone was quite understanding. And no words can express the gratitude that Amanda and I have towards our two tour guides, Taiki and Jose. If you need a tour guide, let me know. Taiki is fluent in 10 languages and can take the best pictures. Ha.

I’ve been slow going on the review front but I’ve been in the works on a new article for the city based website, Ajisignal.com. My first article for this site was for the Providence, RI native, Deer Tick. This time around we decided to take on a more seasoned artist. No, we’re not talking about gray haired and aging indie rockers such as Dinosaur Jr., but rather a Boston based, former Seattle transplant, Tim Walsh (aka TW Walsh), and his new band, The Soft Drugs.

So keep your eyes on Ajisignal.com over the next couple days. Or, you can keep your eyes posted here as I will most likely be posting when it goes up on their site. 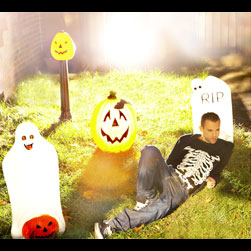 Finally, I want to share with you the U.S. tour dates for M83. I haven’t talked about his new album much but I’m really excited for it because every review and bio of the recording fits right in line with my love for the 80’s. M83 (real name: Anthony Gonzalez), has come out saying that the main influences behind “Saturdays = Youth” are the many 80’s based bands and movies that helped develop him into the artist he is today. From bands such as Tears for Fears and Cocteau Twins as well as the movies of John Hughes; Breakfast Club and Pretty in Pink to just name a few.

On the road Jose is bringing along the following band members – Loic Maurin on Drums, Pierre-Marie Maulini on bass and guitar and featured album vocalist Morgan Kibby (of LA-based band The Romanovs) on vocals and keyboards. Jose will be playing vocals, guitar and keyboard.

The album is due April 15th on Mute and the single, “Colours”, is being released on February 26th and includes an exclusive remix by Jori Hulkkonen. Stream the song on their Myspace page or stream it via WMP or RealPlayer.