Looking to start 2009 off with a bang, John and his cohorts have announced that they’re working on their 3rd album, and their 2nd hasn’t even been released yet.Â A recent recording was polished off from their upstate New York studio and it’s a great little cover of Paul Simon’s tune “Still Crazy After All These Years”.Â To show off his music skills, John hoped on the piano for this tune while his bandmates, Chris Ryan plays bass and Dennis Ryan plays drums.Â Their latest addition to Deer Tick, Andy Tobiassen, is not featured on the recording. 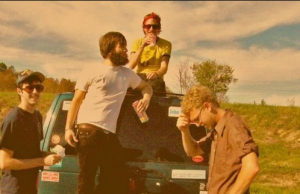 “Still Crazy After All These Years”

Aquarium Drunkard also posted this recording and to avoid duplicating my sentiments on this cover, I’ll steer you this a way:

Their 2nd album, “Born of Flag Day”, is due out in 2009 on Partisan Recoreds.Â Details are due out soon on the official release.