It would be interesting to run a report on the origins of bands currently inhabiting both the island of Manhattan and the various neighborhoods of Brooklyn.Â If you were to tell me that Chairlift were recent transplants from Boulder I wouldn’t have believed you.Â This sound doesn’t come from any where else but NYC, Brooklyn, Paris and London.Â Right?Â Wrong. 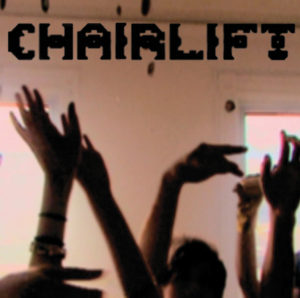 Truth be told, Chairlift are recent transplants from their native home town of Boulder and are riding a wave of hype fueled by the appearance ofÂ “Bruises” on an iPod Nano ad and the recent signing to Columbia Records, who have a tendency to jump on newly hyped bands that have electronic dance traits (MGMT, Passion Pit).

Columbia is re-releasing their album, Does You Inspire You, on April 21st.Â It will feature two new tracks, one of which was produced by Chris Taylor of Grizzly Bear, “Dixie Gypsy”.Â The other, “Le Flying Saucer Hat”, is an original tune written by lead female vocalist, Caroline Polachek.

“Le Flying Saucer Hat” opens with Caroline counting off in French and leads into a Chinese chopsticks style synth line accompanied by a Joe Strummer like guitar.Â The song is sung entirely in French and was inspired by her Italian neighbor who once told her that her beret looks like a “flayin sausah hat”.

I’m a sucker for 80’s synth sounds and an even bigger sucker for female French sung vocals (see Nouvelle Vague).Â So it’s no surprise that this track struck a chord with me.