When I first heard “Sleepyhead” early last year I didn’t know what quite to think. Minus the vocals, the sound was familiar. Electropop is nothing new and is considered by some to be almost mainstream thanks to Matt Murphy and his LCD Soundsystem project and our friends across the pond, Hot Chip. But if I had to choose one of the two that Passion Pit reminds me the most of it’s LCD. Not necessarily because of their sound but because of how the music is produced and written. In essence, a one man show. 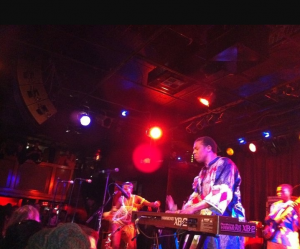 In no way am I discounting the talent that now supports Michael Angelakos. As clearly stated at this show, Passion Pit is more a band then it is a moniker like LCD Soundsystem is for Matt Murphy.Â Keeping the beat behind the drums with his big studio headphones is Nate Donmoyer, on the synth/samples/guitar is Ayad Al Adhamy, on bass is Jeff Apruzzese and on the keyboard is Ian Hultquist.Â It’s still way too early to say whether ‘Pit will have a similar rotating cast of characters like LCD but it’s safe to say that right now, the band appears to be locked in to a groove.

I began the show in the pit, snapping a few shots before handing it off to my photo guerrilla, T dog. Therefor, the performance didn’t start to really hit me until they played “Secret Place”. As I suspected in my preview, the chorus section that uses a group of kids for the melody was supported by the crowd, but not because the band asked them to, but because the crowd wanted to. This formula suites Passion Pit very well. Besides Michael’s vocal style, this helps differentiate them from the other electropop bands. Later, when they played “The Reeling” for the encore, the crowd responded with force, “Oh noooooooo”, over and over again.

Besides the typical standouts, “The Reeling” and “Sleepyhead”, a song that took me for a ride was “Swimming in the Flood”. One of the slower tracks on Manners, their debut album.Â With its simple keyboard line over Michael’s floating vocals, this song does a nice job of lifting the crowd in to a frenzy as it draws to a close.

With the family and close friends in attendance, the band was excited to be home.Â To me, it seems as if lead man, Michael Angelakos, is a bit shocked by the rush of success and attention they’ve received.Â Everyone else appears pumped to be along for the ride.Â It must be a daunting thought to be the main song writer for a band that has only one hour of material, was signed by a major label (they are signed to Columbia Records in the U.K.), and will be under the gun to reach into his brain to pick out more “Sleepyheads” and “The Reelings” to keep the momentum going.Â It’s a daunting task but one I sense Michael is up to.

One thing is for sure, the kids were jamming last night.Â I’ve said it before and I’ll say it again, the Paradise is by far the best midsize venue in the greater Boston area.Â From the giant polls painted to look like funky trees that stand smack in the middle of the room to the close proximity of the balcony that hovers over the crowd, there’s a sense of comradery in the ‘Dise.Â Every show that’s geared towards dancing should be performed here.Â My only comment would be to the house sound team.Â The bass amps stage right were a bit ridiculous.Â I felt my brain move several inches to the left and right every time the bass or kick drum was hit with force.

I look forward to following Passion Pit and hope that next time around instead of one hour of music in their repertoire they’ll have two hours to help keep the party going.