Dawn Landes, originally from Kentucky, now living in New York City, just released her 3rd album. At least she thinks that’s right. It may be a little more because there are a few EPs thrown in the mix throughout the years. Yes, Dawn has been jamming in the new wave of folk / country scene for roughly ten or so years now. In fact, she played Club Passim about eight years ago. She slung her gee-tar on her back, made the trip on the Fung Wah and played solo during one of Harvard’s folk festivals.

The album is called Sweet Heart Rodeo and the overall theme is about relationships and the way it can feel like you’re riding a bull just to keep everything on track to… happiness? Sure, that sounds about right. In fact, the title track is based on her grandmother who ran away to join the rodeo back in the depression era after her grandfather ran off with all their money. 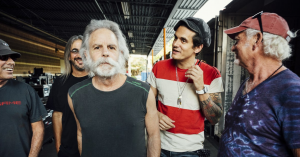 Dawn and her tour mates – Josh Kaufman and Ray Rizzo – have been playing together for a couple of years. But Ray, the drummer, and Dawn have known each other since her Louisville days. And it shows in their brother / sister like aurora that I got from the both of them. Ray, as both Josh and Dawn claimed, is their renaissance man. He’s not just a drummer, he’s a harmonica player, keyboard and tambourine man all wrapped in one. I’m sure I’m missing one or two other instruments he toyed with. My favorite though was his mini Korg sitting strategically to the right of his kit for easy access.

Not to leave Josh out, he’s written his own song for the album, Dance Area, which matches perfectly with Dawns singing style. He played bass for most of the show but picked up his guitar for various occasions, something that Dawn clearly enjoyed when he did so. And I did too.

While Dawn may have country influences, her vocals are not your typical Dolly Parton type country sound (Dolly happens to be one of her favorite country singers). Combined with her move to New York then to France and back to New York over the past ten or so years, that southern accent has gone bye bye. But she’s able to real in a country tinge here and there where appropriate.

Listen to Dawn and Justin Townes Earle singing a Dolly Parton cover, Do I Ever Cross Your Mind

After Danielle Doyle opened the show, who did her part to make us laugh and even sing a little, Dawn and company came up to put on a very enjoyable show. The majority of the set was filled with songs from Sweet Heart Rodeo. They opened with Wandering Eye, a stand out in my opinion on the album, which may entirely be because I’m a sucker for the harmonica or that she mentions going to Philly, my birth city and also secretly my favorite city (but don’t tell that to my Boston brethren). Oh, wait, I just did.

Romeo, a playful swing and sway tune followed. She sings of being stood up by her boyfriend on her birthday. Men. So typical.

I took a minute to capture live footage with my trusty iPhone camera. Little Miss Holiday is a song that was written about Jodi Foster’s character in Taxi Driver. Watch them play it live:

While she played mostly her new songs, they threw in some covers from time to time. One traditional tune that I think was The Storms Are on the Ocean, an old 60’s French song originally sung by a super model that Dawn said nobody truly understood or listened to her music with a seriousness it deserved. They finished off the night with a Tom Petty song, Southern Accents. Perhaps a slight poke at her lack there of.

But the standout of the night was the song Bodyguard, which is found on her 2006 release, Fireproof. The recorded version is much slower then what they played this night. They came out rocking and didn’t have any thoughts about turning back from that rock they picked up. They hit home with this song and I’d love to hear them re-record it with as much gusto as they did this very night. If only I had decided to record then.