What’s fascinating about Hot Chip is how much their style evolves from album to album yet some how they manage to keep the unique Hot Chip sound in tact. What is the sound you ask? It’s the sound of electrical pulses hitting you from every dimension – 1st, 2nd, 3rd and even the 4th – which forces your body to react. Some react positively while others gasp at the electronic cross over attempt. I for one was never a big electronic music fan. I’ve always been a sucker for the classic four-piece rock band – lead guitar, bass, drummer and either rhythm guitar or keyboard player. But Hot Chip has managed to combine the best of both worlds. They usually don’t use a drummer in the studio, leaving the masterful beat making up to Felix but every now and then they’ll recruit a friend to hit the skins at their live shows such as Pat Mahoney (also plays for DFA’s LCD Soundsystem project) during their 2007 fall tour.

One of my more memorable moments as a music blogger was when I had the pleasure of interviewing Joe Goddard when they played at the Paradise Rock Club in 2008 in support of their last album, Made in the Dark. 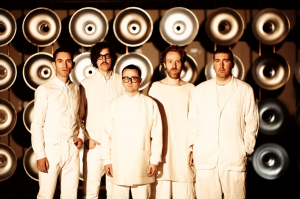 I’ll never forget the first show at Great Scott in 2006 on a random Monday night. I had only heard about them from a Philly friend who described their sound as being super chill. Chill was the last thing on their minds this night. The Warning, the follow up to Coming on Strong, had yet to be released in the states but it was a clear departure from their laid back style on Coming on Strong. This first ever stop in Boston had the band testing out their new songs and when we walked out of that show we had sweat stained clothes and big grins on our faces. I, or rather we, became instant fans and have been ever since.

They have an album coming out in 2010 called One Life Stand. Listen to the first single, “Take It In”.

Got me hooked: The Warning

Bonus Video: This is from the show in April 2008 where we interviewed Joe Goddard before hand. Amazing show. This is “Crap Kraft Dinner” off of Coming on Strong. The song builds and builds to a climax that always gets the house rocking. It’s common to hear them throw in the Fleetwood Mac song, “Everywhere”, at the beginning during their shows, which they do here.