Leave it to Wilco to walk out to the theme song from the Price Is Right. The analogy isn’t too far off with Tweedy’s Bob Barker like banter throughout the show – somewhat condenscending at times but always cunning. They also gave away two “dinner for two” gift certificates to the great Central Square based restaurant, Craigie on Main, so the game show experience is perhaps a good way to describe a Wilco show.

While the Price Is Right is a seasoned game show, the band on display this very night is the epitome of seasoned professionals. From the band members to the crew, Wilco have their concert performance down to the minute details. But I can’t kid myself as to who was truly on display this very night. For some, the single note from Miles Davis’s trumpet makes them cry while for others it’s the sound of Yo-Yo Ma’s cello. For me, the guitar has always been my go to instrument and when played to perfection it moves me like no other.

I was already aware of Nels Cline’s talent before this night. The album Sky Blue Skybasically nailed that notion into the coffin. But seeing this mad genius live takes it up a notch. And there’s no better song then “Impossible Germany” that puts this into full perspective. I couldn’t find a video of this song from the Boston show but here’s a good quality live version. Wait till about 2:45 minutes into the song and let Nels take you on a ride for a little more then three minutes. It may be the best three minutes you’ll spend all day. 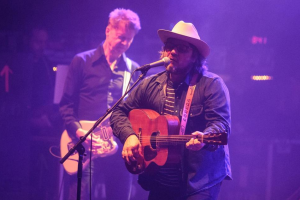 What’s really amazing about this band is their endurance. Playing for over three hours straight, a total of forty-one songs on this night, will put just about any man or woman into submission but these guys are doing it every night they take the stage this tour. As a fan, you’re bound to here your favorite song whether it’s an oldie from albums like A.M., Being There or Summerteeth, or off their critically acclaimed album Yankee Hotel Foxtrot, Wilco is prepared to show just about every type of fan why they’re one of the best bands around today.

Spiders (Kidsmoke)
How to Fight Lonliness (Wilco the Album)
You and I (Wilco the Album)
Forget the Flowers (Being There))
Someday, Some Morning, Sometimes (Mermaid Ave.)
Laminated Cat (Originally called Not For The Season until Tweedy reworked it for the Loose Fur album)
When You Wake Up Feeling Old (Summerteeth)
War on war (Yankee Hotel Foxtrot)
Passenger Side (AM)
I Must Be High (Summerteeth)
Airline to Heaven (Mermaid Ave)

– Segued right back into the electric set –

For you Bitorrent people, here’s the recording of the Boston Show.

More pictures of this Boston show can be found at baumannphoto’s Flickr page.

They play just two more shows in the states – tonight in Philly (4/10) and then in Pittsburgh the following night – before they head to the far east, starting in Japan then heading to New Zealand. See the rest of their tour dates. They announced at this show their curated festival later this summer here in Massachusetts (North Adams), the Solid Sound Festival @ Mass Moca on August 13th.