If you’re in a band, struggling to find your sound and cohesiveness, here’s an idea for you – move in together. Clearly this strategy has been working out for the Los Angeles based group Local Natives. Currently on a North American tour in support of their debut album, Gorilla Manors, the term cohesiveness sums up the essence of their music.

For those who own the album but have never seen them live, you’ll find it interesting that there never appears to be a single leader on stage. If there were a front man it would be the cymbal that stands in the middle of the stage that is abused throughout the night by any given member that happens to be situated next to it. If you’re just hearing about Local Natives, they take the “native” aspect of their name to heart by infusing their music with lots of poly-rhythmic activity. Something they say was only possible by establishing a deeper connection with each other through their living quarters.

Since they only have one album, the show was rather short, unlike the Wilco show from earlier last month. But what they did play they played with all their might. Coming off a New York City show, where they were told just hours before that a special guest would be making a visit to catch their act, they didn’t appear or sound tired. Warning Signs, a Talking Heads cover, is a perfect fit for Local Natives. It’s clear they take a great deal of inspiration from the legendary group and it appears through various in-person accounts that David Byrne was nodding approvingly during their rendition at the Bowery show. I’m sure all band members will remember fondly the time that David Byrne himself expressed interest in seeing their act. Who knows, there may even be a collaboration in their future – we all know how much David loves working with young acts (the creepiness in that sentence not intended). 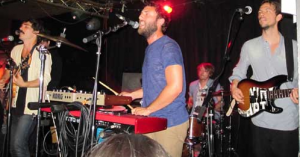 Sun Hands closed us out for the night and had the place going crazy. Unfortunately that was the last and final song. As a young band, who I was told only has a few other EPs and songs that aren’t band favorites so they’re not playing them this tour, it can be tough to deliver live performance expectations. But with the energy they pack into the set they do have, you won’t need much more then what they give you. I’d love to see them come back during their next round of dates with a few extra tricks up their sleeves. Maybe a new cover or even better, some new material. As I’ve been told by many a bands, the road can often lead to some of the best song writing.

If you have the chance to catch them in action during the current tour, do yourself a favor, GO! You’ll be privy to a band whose future looks rather promising. Bostonians, we’ll see them again in August. As expected, they’re moving up in the world and will be headlining at the Middle East Downstairs on August 5th (Tix on sale now).

I failed to write down the first three songs but thanks to Ryan’s Smashing Life I have the completed set below:

This appears to be the set for their other shows as you can see over at NYC Tapers review. Download the live show as well at NYC Taper.