I have a tough time critiquing a full album when there are multiple vocalits. Each vocalist can bring to the table a new vibe, a new technique or a new feel to the album. One good example is Nouvelle Vague, the bosa nova style French female vocalist group that revamps songs by such bands as Sex Pistols, Depeche Mode and Joy Division.

What helps “Deep” hold up as a complete album is the production and mixing of the two members of Ror-Shak, Stakka and DJ DB. Both are very well known in the Drum & Bass world. DJ DB was one of the first supporters of D&B in America and Stakka is a principal in the label that brought Fujiya & Miyagi to our shores. Given their backgrounds, they’re able to successfully meld their beats together and sampled vamps. There is a dark and mysterious element to this album, hence the title. Helping to enhance this feel is the albums guest vocalists – Julee Cruise, Lisa Shaw, Wendy Starland and Chantel Claret from Morningwood. Besides Chantel, you’ve most likely heard these vocalists at some night club as you danced the night away (if clubbing is your thing). 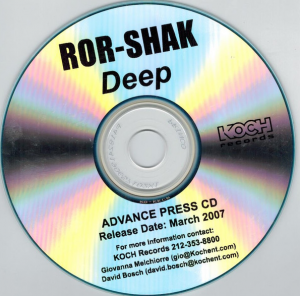 It’s also easy to hear the Zero 7 influence, as both artists site them as inspiration for the album. An interesting point to their story is that they actually started out by producing a dancefloor tune that took hold of many clubs and became a sought after track. After their initial success they agreed to collaborate on a full album but it was during the making of the album that they began moving away from pure dancefloor D&B to more mellow and easier listening grooves.

The two stand out tracks for me are “A Forest” and “Heist”. “A Forest” features Chantel Claret from Morningwood. It starts off sounding a bit like a Depeche Mode song. The same high treble guitar sound with a bunch of reverb. Then Stakka turns the beat up and Chantel’s voice comes soaring in. “Heist”, on the other hand, doesn’t involve any vocals. It’s a real dark moment in the album and we find it towards the end of the album. Some of the beats sampled remind me of the recent masterpiece by Knife. There are also moments during the song that I’m reminded of the movie Labryinth – the part when the young female is in distress, running for her life from Bowie only to find that she has no choice but to face her fear of the labryinth.

It’s nothing mind blowing but I don’t think that’s what these two were going after. I think they were looking to make a record that you could pop on during any number of occasions. Some tracks you could easily see a hundred kids blaring at 3 am waving their glowsticks in the air going nuts while other tracks you can easily see yourself cruising in the car on a nice Sunday afternoon. It allows your mind to drift and for a moment or two to think deep thoughts. Nothing to unfamalier for this philosopher major.

If you’re a fan of Portishead, trip-hop, drum & bass, electronic lounge or just a curious music lover, I would recommend giving this one a shot.