(Artwork above by designer Mr. Asami from San-X)

I got in to the Ramis Auditorium last night and gave a couple test shots with the old Point n’ Click and then shut down city. It was all Broken Social Scenes fault. So no mind blowing pictures like I usually do for live shows. But I managed to jaut down some notes during the show so here it goes. My best attempt at a recap of the Freewheelin tour.

Right out of the gun they jammed out their first single off their latest album, I Am Not Afraid of You and I Will Beat Your Ass. I like Beanbag chair but not a huge fan. That’s all I have to say about that. Then came the first onslaught of shout outs from the crowd. Apparently these kids didn’t go to kindergarten as they figured who needs to raise their hand to ask a question when I can just blurt it out. Of course, the first question was about the dismal Mets and if they knew what had happened. Ira came back with a quick remark saying “when we were here back in 87′ we were respectful enough to not stand up on stage and say, ‘hey what happened to the Red Sox’.”

Then someone blurted out, “what are your thoughts about the stock market“. James came back this time with his poignant remark, “it’s a good time to buy low and sell high“. Everyone got a chuckle. In fact, there was a good amount of chuckling because James is one funny motherf’er. 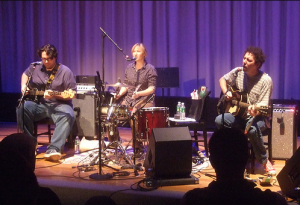 There was a question asked about their up and coming Saturday Night Live gig / not really an official gig. Apparently, since the writers are on strike, the entire cast of SNL is conducting a show at the UCB Theatre in NYC. All the skits were previously written and they asked if YLT would be their musical act. I guess this was suppose to be a secret so when Ira asked the guy, how did you find out about that, he replied “I have my sources”. Ira then replied, “well if you’re not going to tell me then I’m not going to tell you any more about the show.” Man, they were quick on the come backs. Very witty, the trio from Hoboken.

Other quick tidbits, James loves Red Snapper (label mates), playing with Jonathan Richman was an all time high for the band, Adrian Grenier from Entourage is a big YLT fan and finally, they like to drink micro-brews from Western Michigan.

And how was the music you ask? Outstanding. Down to every note and every harmony, Ira, Georgia and James were on point. They may come off as a laid back bunch and probably don’t practice all the time like some grueling rock bands say they do, but it doesn’t matter. When you have the chemistry that they have you don’t need no stinking practice.

One word I put down that I felt best described their sound, caressing. Even when they break in to their distorted jams and feedback mayhem, their sound creates a soothing aura and I was more then willing to take it all in.

Here is my attempt at their the complete set list (with a little help from Brad):

*Songs added by Mr. Bradley Almanac. I left my description of the set closer as I thought they were singing Multiply when really they were singing Emulsified. Ah, these old ears of mine. The fact that I couldn’t get the Neil Young cover is going to get me in hot water with a good friend of mine from Philly. And “You Tore Me Down” I had as the Cats Stevens tune, “Here Comes My Baby“, which is on the same album as the Flamin Groovies cover, the Fakebook album. It was a lyric in the song that threw me off, “Baby don’t run away”. So many baby’s in the lyrics my intuition was to go with the track that had baby in it. Oh well, goes to show you how intuitive I am.