Hot Chip
Made in the Dark (EMI / Astralwerks)
Recommendable to people who: Like Hot Chip, can handle drum machine versus real drums from time to time, like to dance, fan of krautrock, fans of funky electronic soul, experimental music

Sometimes a band comes along at just the right moment. Sometimes a band takes those moments and instead of just reveling in its present glory (cause, it’s not horrible to enjoy the fruits of your labor), it thinks of the future and how they plan to keep themselves going. How they can keep it fresh while at the same time echoing their past experiences that have brought them to this moment.

To me, Hot Chip is a band that embodies such a group. 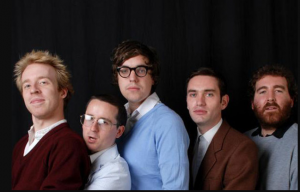 Those familiar with the fivesome from London probably know them as the tongue and cheek electro pop crew that is both prolific in the studio, whether mixing their own songs or their peers, and have exceptional chops during their live acts. In fact, it’s their latter talent, their ability to take live shows to the next level, that has helped contribute to the direction Made in the Dark has taken.

You’re probably wondering if they sound completely different. Do they get serious? Have they toned down the electronic influences?

My response is that they do sound different. They do get serious and at times they have toned down the electro craziness. But, as mentioned above, that doesn’t mean they’ve left these influences out to dry.

The first few moments of the album come at us like a ton of bricks. And I mean you’re hit pretty hard. By now I’m sure most of you have heard the Todd Rundgren produced track, “Shake A Fist”, and “Ready for the Floor”. However, I’m sure most have not heard the album opener, “Out At the Pictures”. It starts off with an electronic pulse that buzzes in your ear until the first synth line comes chugging away like a train gaining speed. Almost as if it’s revving up the album’s engines and preparing for the long and bumpy road ahead. Finally, in comes the drum and bass which at first gives us some break beat wildness where we’re not sure where to put our feet. Then, right as the break beat, breaks, the beat comes back in with a fluid “four on the floor” disco pulse that helps guide your toes and off we go to dance city.

After getting slammed in the face with the first three tracks, the show stopper, “Bendable Poseable”, sends us for a whirl. It’s not the most danceable little bugger on the album nor the most attractive. But it has it’s moments. It has the Hot Chip cheekiness we’re all use to with the wacky vocal tweeks and 80’s geek outs. I swear I can hear a sound bite from the Labyrinth soundtrack in here some where.

“We’re Looking For A Lot of Love” is the reason you’ve probably heard that there is more soul influences on Made in the Dark then on Coming on Strong or The Warning. This is the kind of song you buy subwoofers for. The bass soothes your ear as Alexis’ vocals reel us in. Awesome stuff.

With just the first few tracks under our belt it’s clear to us that Hot Chip is taking their experiences on the road and infusing them with their studio work. Many songs include sections that are clearly meant for exploration. One of the amazing feats of Hot Chip is their ability to pull you so in to their songs that they will introduce new beats or new melodies that weren’t even related to the song from the get go yet it all seems very congruent.

It’s tough to pinpoint who is doing what in the band besides Alexis’ vocal work but it’s very well known that Al Doyle (guitar, synthesizer, percussion) brings a higher level of musicianship then any other member. If you happened to catch LCD Soundsystem live during the 2007 tour of the immaculate album, Sound of Silver, you then saw Al playing guitar. One thing I noticed during the show here in Boston was how Al seemed to take control in the background of the timing between all the musicians, tapping his head, pointing to his guitar and counting off the beat with his fingers. Most of the guitar riffs you hear are crafted by Owen Clarke, a good portion of the programming is on the shoulders of Felix Martin but in the end, it’s the energy that brought founding members Joe Goddard and Alexis Taylor together at the Elliot School in Putney, London that drives the force behind Hot Chip.

The move towards a more serious Hot Chip is heard loud and clear on the title track, “Made in the Dark”. With it’s slow groove (another shout out to their love for soul) and Alexis’ careful treatment to the delivery of each word, this song is no joke.

As the first half of the album was a sure sign that the party is just getting started, the last half is exactly the opposite. You can hear it in the vocals…

“it was a really long time ago when you were a friend of mine, and I would really like you to know it would ease my mind, I would hold you up again, if you asked me” (”Touch To Much”)

You it hear it in the music. You hear it in their energy (”One Pure Thought”), both high and low (”In the Privacy of our Love”). I can just picture the lighters waving during the latter song, which closes out the set…ahem, I mean, album.

This flow fits the mold of any perfectly structured live show. The fact that a majority of the album was recorded in their own space and often times, recorded in one take, goes to show how comfortable they feel playing with each other.

In fact, if they came out this Saturday night in New York City at the Highline Ballroom and played the entire album, front to back, I wouldn’t care. In fact, I would be very, very happy.