Not since the death of Jerry Garcia in 1995 has there been anyone who can hammer out a guitar solo with enough anticipated precision in every note to make you want to shake your head off. It was one of the greatest abilities the “dancing bear” had in his arsenal. He made you think he was going to hit one note, then fake you out and go in a completely different direction. With just one note he could cause you to leap out of your seat in awe. 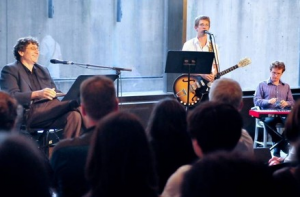 This may sound stupid, but I got the new Dungen album back in the fall and I misplaced it until just a few days ago. I had left it in my disc golf bag of all places. Had I been listening to this album for most of the fall it probably would have landed on my year end list.

I was on my way home from work when I came upon “Samtidigt 2″, the second to last song on the album “4″.  If you’ve never listened to Dungen, you should know that they are typically coined as a psychedelic rock group.  So it’s not a strange thing to think of bands like the Grateful Dead when listening to their music.  However, until now, I hadn’t heard a guitar solo quite like the one on this song.  It truly conjures up memories of Jerry and his finger picking madness.